After getting absolutely humiliated and embarrassed last Sunday by the class of the NFC, the New Orleans Saints, the Eagles will have a seemingly much easier matchup this week as they face off against their NFC East rival New York Giants. Earlier in the year, the Eagles defeated the Giants 34-13 at MetLife Stadium in one of the only easy-to-watch games of this season. However, a lot has changed since then and this time around is slated to be extremely different. Let’s take a look at the Tale of The Tape and see how the Birds matchup with Big Blue.

Eagles: Carson Wentz and the Eagles are currently the 14th ranked passing offense in the NFL, with an average of 257 yards a game through the air. Wentz will be coming off of the worst game of his career in which he racked up only 156 yards, completing just 19 of his 33 attempts. He also threw 3 interceptions and was sacked 3 times. Luckily for the Eagles, the Giants have the 22nd ranked passing defense, allowing an average of 256.1 yards a game. If the Eagles offense can’t figure out a way to be effective against this defense, Mike Groh’s already HOT seat might as well be on fire.

Giants:On the other end, the Eagles have one of the worst passing defenses in the NFL at 27th in the league.. there are only 32 teams. The Eagles so far this year have given up an average of 276.5 yards a game through the air. This week is likely to be no exception, and quite frankly may be even worse as the Eagles will likely be without their top 4 remaining cornerbacks. Rasul Douglas, Sidney Jones IV, Jalen Mills, and Avante Maddox all did not practice this week. The Giants passing offense has been very effective this year, and is ranked #13 in the NFL with an average of 257.9 yards a game gained through the air.These secondary troubles couldn’t have come at much worse of a time as the depleted group will have to go against one of the best WR duos in the NFL in Odell Beckham Jr. and Sterling Shepard. At the moment, it appears that lethal duo will be defended by Chandon Sullivan, De’Vante Bausby, and Cre’Von LeBlanc… yikes. It is extremely difficult to imagine a scenario in which OBJ and Shepard don’t have very big days on Sunday.

The Eagles secondary health issues couldn’t have come at much worse of a time with the upcoming Giants. Odell Beckham Jr. and Sterling Shepard, one of the best WR duos in the NFL.

OBJ and Shepard will be likely going against Chandon Sullivan, De'Vante Bausby, and Cre'Von LeBlanc pic.twitter.com/5N6Trdsfr2

Eagles:The Eagles may finally have their definitive running-back answer in Josh Adams. In the last 2 weeks, rookie RB Josh Adams has rushed for 100 yards on just 14 total carries. Josh Adams also scored the first touchdown of his career on a 28 yard burst up the gut against the Saints. Unfortunately, it was the Eagles lone touchdown of the evening. Overall, the Eagles have the 25th ranked rushing attack with an average of 98.2 yards a gamegained on the ground. The matchup is perfectly and evenly ranked as the Giants rushing defense is ranked 25th in the NFL, giving up an average of 125.4 yards a gameon the ground.

Giants: Saquon Barkley has been nothing short of spectacular this season and is the clear favorite to win Offensive Rookie of The Year. Therefore, the following stat is sure to shock you as much as it did me, the Giants have the 29th (third-from-last) ranked rushing attack in the NFL, averaging just 88.3 on the ground a game. How can that be? While Barkley is MORE than capable of running the rock, most of his yardage and big plays we think of he’s made this year came off of a check down pass from Eli Manning. While the Eagles 12th ranked rush defense gives up an average of 101.4 yards a game, the vocal point of this week will be containing Barkley in the backfield and on check-downs/screen passes. In an extra blow to the Eagles defense, it appears that they will be without star MLB Jordan Hicks, after he suffered an injury in New Orleans. Many, including me, would argue that the starters shouldn’t even have been in the game much of the second half due to it being an absolute blowout, but what do I know? 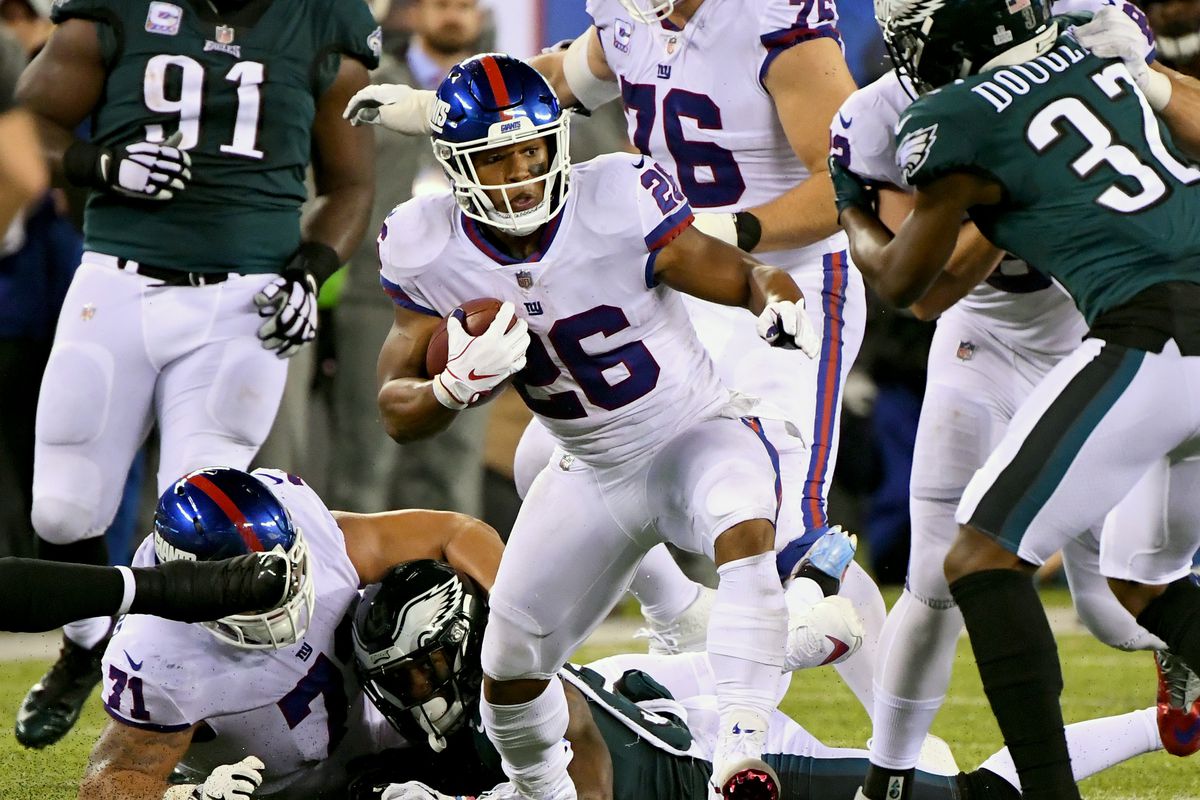 Five Things To Watch For:

1.) How Carson Wentz bounces back after the worst game of his career:

Wentz has had some games in which he’s struggled, particularly in his rookie year, but none as bad as last Sunday. Wentz has been very confident in press conferences this week and has said he doesn’t get hung up about bad games. We’ll see if he has the short-term memory a great QB needs to forget about bad games this Sunday.

Carson Wentz on if he’s mentally rattled after Saints game:

Carson Wentz: “I hold myself to very high expectations. I’m not playing where I want to be whatsoever. I have to be better to get this thing going.” pic.twitter.com/J6d5ByfiNw

Carson Wentz: “You guys can keep having your doubts about us. We know we’re not playing up to our standards, this isn’t our best product. But we know what we’re capable of, and the guys in the locker room know that. We’ll bounce back and it starts next week.”

2.) With OC Mike Groh being on a very hot seat, will anything change this week?

OC Mike Groh was considered by many to be on the hot seat even before the Saints game. After last Sunday, there are now more fans and media alike than ever calling for his firing. With the way the offense has struggled thus far, it has led many to blame Groh for the struggles. Groh has not helped his case either after making a completely boneheaded comment in which he admitted he’s struggling to get WR Golden Tate integrated into the offense, saying “It’s been challenging to integrate him.” When asked about how Nelson Agholor has not been involved in the offense much of any lately, he said “I have to find a way to get him more involved.” At this point, Groh is losing almost any support he had remaining. If the offense struggles again on Sunday, I quite frankly wouldn’t be shocked if he got fired mid-week and the Eagles gave Duce Staley an audition at Offensive Coordinator for the remainder of the season.

3.) How does the Eagles decimated secondary contain Odell Beckham Jr. and Sterling Shepard?

With Ronald Darby and Rodney McLeod being lost to injury for the entire year, and now having 4 more secondary starters seemingly out on Sunday, how on Earth will they defend the dynamic duo of Odell Beckham Jr. and Sterling Shepard? Lord knows I am one loyal and optimistic fan, sometimes to a fault, but I do not see how there is any chance Chandon Sullivan, De’Vante Bausby, and Cre’Von LeBlanc contain the Giants WR’s. Unless DC Jim Schwartz finds a way to clone Malcom Jenkins so that he can be in multiple locations at once to provide safety help, I’d imagine Beckham, Shepard, or both will have tremendous games. Let’s not forget about star TE Evan Engram either. This could very well be a shootout for both team’s offenses.

Saquon Barkley is one of, if not the best at catching the ball out of the backfield on check downs and screen passes and making big plays happen. The Eagles could be in for a big problem trying to contain Barkley, especially since it appears MLB Jordan Hicks will not be playing after suffering an injury in NO. Kamu Grugier-Hill and Nigel Bradham will have to keep constant tabs on #26 and never let him out of their sight, or else he’s sure to make them pay. Earlier this year even with Hicks on the field, Barkley absolutely destroyed the Eagles. He had 229 total yards, and a TD.

The Eagles need to forget all about what happened last Sunday and focus on these remaining 6 games. With the Redskins falling to the Cowboys on Thanksgiving, the Eagles are now just 1 game out of first place in the NFC East. The Birds remaining NFC East schedule includes two against the Redskins, and one against Dallas. If the Eagles can’t find a way to prepare themselves and be fully motivated and hungry for a win this Sunday, even an optimistic fan like me will have to admit it’s over.

Eagles fans need to be louder, angrier, and more amped than ever heading into Sunday. If we want the team to deliver the way they should, it needs to start with the fans. Let’s pack that Linc on Sunday and show the Eagles that the past is the past and it’s time to get it going NOW.

Eagles fans need PACK that Linc on Sunday and be louder than we’ve EVER been before. There is way too much at stake this week. The team NEEDS to see that we are still hungry and ready for a run. Let’s boost their spirits and drive them to kill it in the homestretch.