The Boston Red Sox are the 2018 World Series Champions after taking down the Los Angeles Dodgers for their fourth World Series championship since 2004 after a 5-1 win last night. When you think of this year’s Red Sox squad, you may think of MVP candidates like Mookie Betts or JD Martinez or Cy Young candidate Chris Sale and fellow ace David Price. You probably will not think of this year’s postseason heroes, Jackie Bradley Jr or Steven Pearce, the ALCS and World Series MVP’s, respectively. Another thing to note, they are both former University of South Carolina Gamecocks.

For the first time in Major League Baseball history, both the ALCS and World Series MVP played college baseball at the same school. The first baseman/outfielder Steven Pearce played two seasons at the University of South Carolina in the 2004 and 2005 seasons and hit .346 with 21 home runs and 76 RBIs en route to the Gamecocks’ third consecutive College World Series appearance and during his senior season, hit .358 with 21 home runs and 63 RBIs before being drafted in the fifth round of the MLB draft by the Pittsburgh Pirates in 2005. Pearce played for six different teams before landing in Boston during a trade on June 28, 2018, and has now played for every single team in the AL East division.

During his 50 games with the Sox this season, Pearce has batted .279 with seven home runs and 26 RBIs. After Mitch Moreland went down with injury during Game 2 of the ALDS, Pearce stepped into the every day role at first base and made the most of it, especially in the Fall Classic. In Game 4, Pearce hit a game-tying home run in the top of the 8th inning off Kenley Jansen and followed that up with a 3-run double to put the Red Sox up 8-4 and would eventually win 9-6 to take a commanding 3-1 lead in the Series. Last night in Game 5, Pearce hit two more homers to lead the Sox to victory: one in the first inning off Clayton Kershaw and a second in the 8th off of Pedro Baez. In three fewer games (did not play in Game 3), Pearce became the first Red Sox player to hit three home runs in a World Series since Hall of Famer Carl Yastrzemski in 1967 en route to his first World Series ring in his journeyman career.

Jackie Bradley Jr is the more recent of the two players to play for the Gamecocks of South Carolina where he played from 2009-2011 and helped USC win back-to-back College World Series in 2010 and 2011, winning the CWS Most Outstanding Player in 2010. JBJ was then taken by the Red Sox with the 40th overall pick in the supplemental first round of the 2011 MLB draft. After being promoted to the MLB active roster in 2013, the outfielder fluctuated between Triple-A and the majors and ended up not making the postseason roster. The Sox ended up defeating the St. Louis Cardinals in the World Series and JBJ received his first career World Series ring.

Over the past few seasons, Bradley has struggled with hitting consistency but has emerged as one of the elite defensive center fielders in all of baseball and was a starter in the 2016 All Star Game. For his career, Bradley is a .238 hitter with 70 home runs and 292 RBIs and has more career strikeouts than hits, but has a career .990 fielding percentage in the outfield with 46 career outfield assists. Nevertheless, JBJ was the hero of the Red Sox ALCS victory over the Houston Astros. In Game 2, Bradley hit a 3-run double in the third inning to put them up 5-4 in a game they would go on to win 7-5. In Game 3, the center fielder hit a grand slam off Roberto Osuna in the top of the eighth inning to extend Boston’s lead to 8-2. Then in Game 5, the former Gamecock hit a two-run go-ahead homer in the top off the 6th inning to put the Sox up 6-5 before ultimately winning 8-6. Those three hits totaled 9 RBIs for Bradley which would be his only RBIs of the ALCS but they were the biggest runs of the series by a long shot. For his efforts, Jackie Bradley Jr. was awarded the ALCS MVP and the Sox returned to the World Series, where JBJ would receive his second career World Series ring. 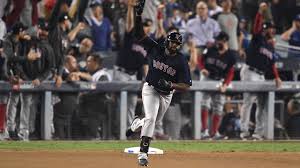 These two former Gamecocks made MLB history over the last several weeks before winning the World Series with the Boston Red Sox, and as a student at South Carolina, it was amazing to watch former alumni be awarded for their efforts in one of the brightest spotlights in all of sports. Bradley Jr. even threw up the “Spurs Up” during a live interview after winning his second Fall Classic. Gamecock Nation, we did it. We will go down in the MLB history books until the end of time. Go Cocks!