Is it October Yet? With another NHL season on the horizon, that means just one thing for us Philadelphians. Flyers Hockey. After a disappointing First-round exit at the hands of the arch rival Pittsburgh Penguins, Dave Hakstol and Co. look to come out swinging with… mostly the same roster? Although the reuniting of 2007 Number 2 pick James Van-Riemsdyk will bolster the Top 6 forward group, much of this Flyer’s squad has been untouched. Well… except the addition of Gritty.

THINGS TO WATCH FOR: 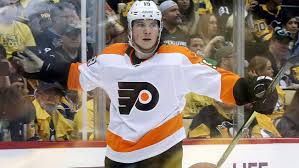 Matthews and Tavares. Malkin and Crosby. McDavid and Draisaitl. The list goes on. In order for this Flyers team to compete in the Metro and the rest of the league, they need a reliable One-Two Punch down the middle. Former No. 2 overall pick Nolan Patrick is the guy for the job. After a slow start to his rookie campaign, Patrick began to come into his own in the second half of last season. Expect Patrick to make the jump with a full healthy offseason, increased chemistry with teammates, and skating alongside dynamic athletes such as JVR and Voracek.

2.)  Captain Claude Leads Us to Girouxsalem

Prior to last season, Flyer’s captain Claude Giroux was receiving much criticism in regards to his play and inability to produce like earlier years. That all changed. After seamlessly transitioning to the left-wing and having Sean Couturier blossom into the 1C role, Giroux did nothing but flourish. Here, he amassed a 102 point total (34-68-102) and 28 +/- rating over 82 games. With a first line consisting of Giroux-Couturier-Konecny, the Captain is surrounded with enough hockey IQ, grit, and skill to maintain his scoring prowess and lead us back into the postseason.

3.) Bernie Is That You?: Carter Hart’s Debut (And Takeover)

After years of goalie carousels and controversy, we have finally found the one. Carter Hart (selected #48 Overall, 2016) has done nothing but dominate junior hockey. Over the past three seasons for the Everett Silvertips, the goaltender has been deemed WHL’s top goaltender three times, and the CHL’s top netminder twice. With this knowledge, Philadelphians have grown impatient, foaming at the mouth to see the league’s next Carey Price in orange and black. Due to the inevitability of Neuvirth and Elliot’s deteriorating health, Carter Hart seems to realistically be a mid-season call-up if Hextall is feeling ballsy.

4.) Mikhail Vorobyev Bursts Onto The Scene

After a stellar training camp and preseason, 2015 draft pick Mikhail Vorobyev has officially burst onto the scene in terms of becoming the team’s third-line center. Centering touted prospect Oskar Lindblom and gritty veteran Wayne Simmonds, Vorobyev can give the Flyers some much needed depth scoring.