The NCAA allows college basketball programs to play a series of exhibition games against international teams once every four years. This year, the Duke Blue Devils went north of the border to play three different Canadian collegiate teams: Ryerson University, the University of Toronto, and McGill University. These games are valuable to NCAA programs to help coaches assess their team in a stress-free environment, as the results do not effect the team’s official season record. 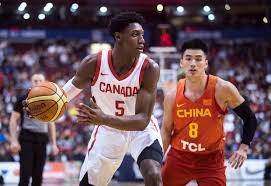 RJ Barrett, the number one overall recruit in the class of 2018, happens to be a native of Mississauga in the Canadian province of Ontario and the location of Duke’s first opponent, Ryerson University. On the meaning of playing in his hometown, Barrett said, “It was great to go out there with my brothers in my hometown. It was special for me.” And the projected number one overall pick in the 2019 NBA Draft did not disappoint in his first outing as a Duke Blue Devil. The 2017 U19 gold medalist had a game-high 34 points on 12-30 shooting, making two threes and shooting 8-14 from the free throw line in an 86-67 win over Ryerson. Barrett wasn’t the only Duke freshman phenom to display his abilities on the court in the team’s first exhibition game. Number two overall recruit Zion Williamson scored 29 points on 57% shooting while connecting on three of four three-point attempts to go along with 13 rebounds, 4 assists, 2 blocks, and 2 steals. The 6’7, 285 pound forward is a highlight reel unto himself, showing off his 45-inch vertical on a play ruled a goaltend after almost hitting his head on the backboard and a thundering put-back dunk in the second quarter.

Duke continued their Canadian tour on Friday night with a 90-60 win over the University of Toronto in the home of the G-League’s Raptors 905. Once again, the Blue Devils dynamic freshmen duo of RJ Barrett and Zion Williamson led the way with a combined 59 points. Barrett once again was the game-high scorer with 35 points on 15-26 shooting (3-8 from 3) along with 9 rebounds and 3 assists. His partner-in-crime, Williamson, added 24 points, 8 rebounds, and 2 steals while showing off his otherworldly athleticism with a breakaway tomahawk jam in the second quarter.

The Blue Devils finished their three game Canada exhibition tour with a 103-58 rout over McGill University to secure the sweep. This time it was Williamson leading the way for the team with 36 points, 14 rebounds, 4 steals, 3 assists, and 2 blocks. Barrett poured in 20 points and flashed his playmaking ability to the tune of 10 assists. The supporting cast of senior Antonio Vrankovic, juniors Javin DeLaurier and Jack White, and sophomores Jordan Goldwire and Alex O’Connell offered more than enough scoring and defensive toughness to pull out a dominant win against a lesser opponent.

The obvious bright spot for the Blue Devils over the past five days was the dominance of the freshman one-two punch of RJ Barrett and Zion Williamson, and let’s remind everybody that Duke dominated this tour without the third best prospect in the class of 2018, Cam Reddish, and a fellow five-star recruit in guard Tre Jones. In a more realistic view of these results, the Canadian teams they played do not compare to their stacked ACC competition with the likes of UNC, Virginia, Virginia Tech, Florida State, Syracuse, and Clemson who are all ranked in the 2018-2019 preseason top 25 rankings.

Duke will open up its 2018-2019 season on November 6 vs Kentucky in the State Farm Champions Classic.