With NBA Summer League ending several weeks ago and training camp approaching quickly, NBA fans now have had their first glimpses of their new rookies in an NBA jersey. But with the NBA season still months away, all we can do is predict the impact of these players against superstar and veteran adversaries as well as a lengthened rigorous season. This will be a prediction on the most pro-ready players who can contribute right off the bat for their teams, not a prediction on who will go on to be the future All Stars and superstars of the NBA. Predictions are based off collegiate and summer league stats, team fit, and expected roles.

The number one overall pick may have been put in the best situation out of every lottery selection in the 2018 Draft. Ayton joins a team where he is the clear-cut starting center and number one option in the frontcourt. He also joins a proven 25 point-per-game scorer in guard Devin Booker and newly signed 3-and-D specialist Trevor Ariza to clear out some space to operate in the low post. Offensively, Ayton has similar skills to that of superstars Joel Embiid and DeMarcus Cousins, as he can score from the post with a plethora of moves and countermoves and has the ability to stretch the floor from beyond the arc and attack closeouts. Armed with an impressive offensive skill set, rebounding tenacity, and an easy path to 30-plus minutes per game, Ayton is my early pick for 2019 Rookie of the Year.

Possibly the most proven player from the 2018 rookie class, the third overall pick is expected to make an immediate impact for the Dallas Mavericks. After winning EuroLeague MVP and the EuroLeague championship, Rick Carlisle and his staff will put the Slovenian in a great situation to succeed. At 6’7, Doncic has great size for the wing and is expected to play both guard positions and small forward for a team looking to make the playoffs one last time before Dirk Nowitzki’s looming retirement. I fully expect Doncic to get starter minutes over the aging, deteriorating Wesley Matthews to inject more youth into their starting lineup. With Dennis Smith being more of a score-first guard, Doncic can feasibly lead this team in assists while being a second or third scoring option behind Harrison Barnes and Smith. The rookie European guard will be a First Team All-Rookie player and make the Rookie of the Year award interesting for Deandre Ayton.

The Atlanta Hawks traded starting point guard Dennis Schroder to the Oklahoma City Thunder a few weeks back and handed the reins to Oklahoma product Trae Young in the process. Unlike previously mentioned Deandre Ayton and Luka Doncic, Young does not have the same supporting cast to allow him to succeed at the same level. Instead the Hawks starting lineup will most likely consist of Young, Kent Bazemore, Taurean Prince, John Collins, and Alex Len with the possibility of Jeremy Lin alongside Young and demote Len to the bench in a small-ball, pace-n-space lineup. Either way, this is not a talented lineup, so Trae Young is expected to carry most of the load on the offensive end. With that said, Young is still a guy who can hit any shot on the floor and find shots for his teammates. He was the NCAA leader in points and assists with an Oklahoma roster devoid of any talent. It is not entirely out of the question for Young to lead the Hawks in both of these two categories, although it may happen inefficiently. 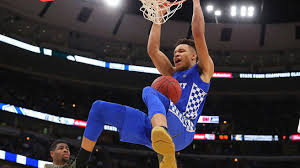 With Kristaps Porzingis still recovering from his torn ACL and out for the foreseeable future (possibly the entire season), the Knicks will be looking for somebody else to shoulder the offensive load. Who better than the rookie who averaged 21.3 points-per-game while hitting 2.5 threes-per-game in Summer League? Shall we forget he was also the man who led the Kentucky Wildcats in scoring while shooting 45.1% off the dribble and being in the 85th percentile in points-per-possession as a pick-and-roll ball-handler. The Knicks may bring Knox along slowly off the bench and start Tim Hardaway Jr, Courtney Lee, and Lance Thomas at the 2, 3, and 4 positions respectively barring anymore offseason trades. New head coach Dave Fizdale would be wise to give Kevin Knox the most minutes possible to give this roster a true number one scoring option on the wing and build chemistry with fellow franchise cornerstone, point guard Frank Ntilikina.

Similar to Knox, Mitchell Robinson will benefit from the absence of Porzingis. With Kyle O’Quinn signing with the Indiana Pacersin free agency, there is an immediate opening for backup center behind Enes Kanter. In comes Robinson, the 11th overall prospect in the Class of 2017 and five-star recruit, higher than first round picks, Lonnie Walker (13), Troy Brown Jr (15), Trae Young (23), and Shai Gilgeous-Alexander (35). Robinson is an uber-athletic center who was a projected lottery talent prior to leaving Western Kentucky to train for the draft. In 24.8 minutes-per-game in 5 games in Summer League, the big man averaged 13 points on 67% shooting along with 10.2 rebounds and 4 blocks. Coach Fizdale could create an offense-defense rotation between defensive liability Enes Kanter and Robinson. Mitchell Robinson could be next in line to follow the path of Deandre Jordan and Clint Capela as athletic rim-running, shot-blocking centers. He won’t push for Rookie of the Year honors like his teammate Kevin Knox or even All-Rookie teams with the likes of Ayton, Marvin Bagley, and Jaren Jackson Jr in his way, but he will provide an immediate impact for the lowly New York Knicks in an energizer role.